Please note: Payment is processed securely through PayPal, using an existing account or by credit card without an account

No payment information is entered on the Society's website

Membership is just $30.00 per year. There is also a $300 lifetime membership available. 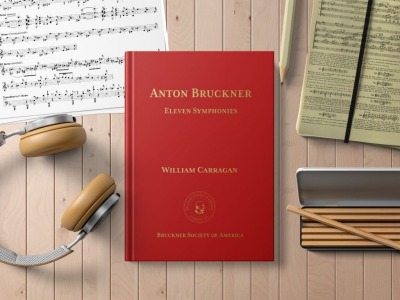 William Carragan's long-awaited book on Bruckner's Eleven Symphonies will be available in Spring 2020. The hardcover book will be published under the auspices of the Bruckner Society of America.

Make a donation of $30.00 or more and you can choose to receive any of of the Bruckner Society's exclusive CDs listed below, or choose from one of the Society's collectibles.

Note: The price of the CD/item includes the membership fee.

Max Rudolf (1902-1995) was an early champion of Anton Bruckner's music and his US Decca recording was one of the first stereo Bruckner LPs released in the United States. He was an early recipient of the Bruckner Society's Medal of Honor. Many Bruckner scholars consider this recording to be one of the finest ever made. The transfer is excellent - taken from a pristine 1/4 track stereo tape.

Great care has been taken to make this a true discographic document.

The purchase helps to support the activities of the Bruckner Society of America.

While this recording has been issued before, this is clearly the best issue to date. The transfer is excellent and great care has been taken to make this a true discographic document.

The cover and label are presented as they were in the original issue, images of the German, UK and US covers and labels are shown, the original notes by ASbraham Veinius are enclosed as well.

The purchase helps to support the activities of the Bruckner Society of America.

As with other Bruckner Society releases, this will be the ultimate restoration of this historic recording. If you are familiar with Bruno Walter's Columbia Symphony Orchestra recording of the Ninth Symphony, then get ready for a shock when you you hear this highly charged account!

The superb audio restoration is by Aaron Z. Snyder.

The CD has all the commentary from the live 1946 Armed Forces Radio transcription, a copy of the transcription label, plus liner notes that discuss the event where Bruno Walter received the Society's Kilenyi Medal of Honor and three reviews of the concert by Louis Biancolli, Edward O’Gorman, and Virgil Thomson

Available only to members of the Society. The CD is a re-creation of the famous RCA Victor 78 rpm set (M-276) featuring Eugene Ormandy’s recording of the Bruckner Symphony No. 7. The recording was made in January of 1935 and was the first Bruckner symphony to be recorded in the United States. For their efforts, Eugene Ormandy and producer Charles O'Connell received the Bruckner Society's Kilenyi Medal of Honor. The CD contains the exact program notesthat were included in the 78 rpm set. Photos of the original RCA label as well as the label for the European pressing are included as are pictures of Ormandy at that time and the concert hall where the symphony was recorded. The set was carefully created to look like a miniature of the original 78 rpm set.

Available only to members of the Society. The CD contains the first ever recording of a Bruckner Symphony. This historic recording was made in 1924 - the centenary of Bruckner's birth! Oscar Fried conducts the Berlin State Opera Orchestra. This CD was released by Music and Arts in 2009 but due to problems with the transfer, much of the recording was off-speed.

For this exclusive Bruckner Society release, all pitch problems have been repaired and the entire recording has been restored by Aaron Z. Snyder.

For the first time, the bass line of this remarkable recording can be heard! This is a must have for every Brucknerian!

This wonderful performance of the Mass No. 3 took place on April 26 and 27, 2013 at the Grace Presbyterian Church, Houston, Texas.The performance was recorded by John Proffitt.

This CD has been newly mixed and remastered in 2016 from the original high-resolution multitrack recording.

Theconcert (and the disc) opens with a rare performance of the Symphonic Prelude which is attributed to either one of Bruckner's students or, in part, by Bruckner himself. This is the world premiere recording of the Symphonic Prelude in its original orchestration. The recording by Neeme Jaervi on Chandos is a contemporary orchestration of the earlier discovered piano arrangement. Michelle Perrin Blair conducts the Moores School Orchestra.

This performance of the Mass No. 3 includes Bruckner's Ave Maria as an Offertorium. The recording concludes with an Organ Improvisation on Themes of Bruckner as performed by organist Sigurd Øgaard.

The Life of Anton Bruckner, by Gabriel Engel. $30

This small paperback book was the first biography of Anton Bruckner written in English. It was published by the Bruckner Society of America in 1931. These are unread and new. Supplies of this rare book are limited!

One of the early editions of Chord and Discord, published by the Bruckner Society of America.

The last published issue of Chord and Discord.

All in excellent shape!